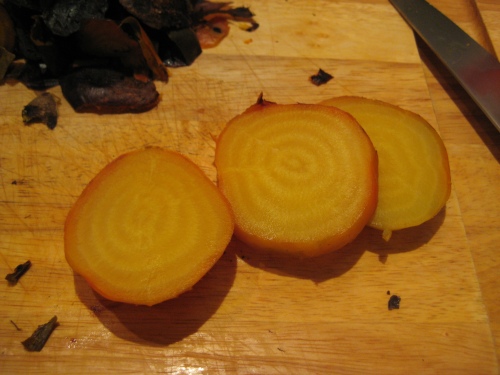 Borscht (beet soup), beet salad, and pickled beets are classic Ashkenazi dishes but in order to make these you need to start with simple cooked beets. I personally love beets and really love them roasted. I tend to believe that people who claim not to like beets (I’m talking to you, Mr. President) have only had the canned, rubbery, disgusting version. I used to be one of those people, then one day I stopped at my sister’s and she was eating beets for lunch. As a young adult I made a point of re-tasting foods I didn’t like as a kid because 9 times out of 10 I would discover I liked them.  My sis offered me a bite of her beets and I was hooked. They were sweet, and soft but with a slight firmness, and not a rubbery bit in sight. I immediately bought some at my local farmers market, brought them home and realized I had no idea how to cook them. I threw them in the oven at what turned out to be no where near enough time, got frustrated and didn’t attempt them again for several years. By this time I had learned to text, and Gordon came to my rescue. I believe the entire response text was “350 about an hour then peel” and that pretty well sums it up. Lately I’ve fallen in love with the golden variety, that my local Whole Foods always has. They are a subtler flavor and you don’t have to deal with the red juice staining everything.

More after the jump

The text message may have been a little simplistic, and you can roast them at higher temperatures if your main dish (say Roast Chicken) requires it. I have also found that the golden beets and the red ones at the height of summer tend to be pretty large and I have had them take as long as 2 hours. When they are done the skins will have darkened and will start pulling away from the rest of the root. When you stick a fork in them they should give like a baked potato. I like to give mine a quick toss in olive oil before I bake them to make cleaning the pan a bit easier, but you can also just line your pan with foil. Once they are cooked they make an excellent side dish all on their own, in a salad or in any number of recipes that the heathen’s will post in the future.

Filed under Fruit and Vegtables