Latkes, In ‘n’ Out style 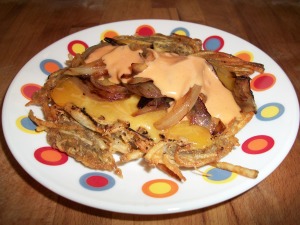 Do you live in California, Nevada, Arizona or Utah? Do you know how to get a double-double animal style? If not, you might want to check out this regional fast food. Now, what would happen if the good folks at In ‘n’ Out were of the Hebrew persuasion rather than the decidedly Christian bent?

Well then there might be latkes on the secret menu. Since they aren’t going to make them, I will. I started off with the same potato they use, the Kennebec. Prized for its large size, thin skin and its flavor. They also slice very easily which is a bonus when you have to reduce them for use in latkes.

I decided to keep these simple, plain to the point of boring to highlight these potatoes and their crisp texture. Upon consulting several cookbooks I learned that another key is to rinse the potatoes of their excess starch with hot water and then allow the potatoes to drain so that you reduce the amount of water that ultimately goes into the fat. I also disposed with any notion of going “light” and fried them in a 1/2 inch of oil in the bottom of a dutch oven.

Latkes, In ‘n’ Out style

Shred the potatoes (I used the matchstick attachment on my mandolin) and soak in hot water for 3 minutes, change water and soak again for a minute. Put potatoes in a strainer and allow to sit over a bowl for at least 1 hour. Mince onions, and mix all the ingredients together in a bowl.

Heat oil in a large skillet or dutch oven until it shimmers. Place about a tablespoon of the mixture into the pan, as many as will fit without touching. Cook about 2-3 minutes on each side until golden brown. Allow to drain on a rack or paper. Serve quickly.

Fry me a river

A 1×1, aka the regular Cheese-latke