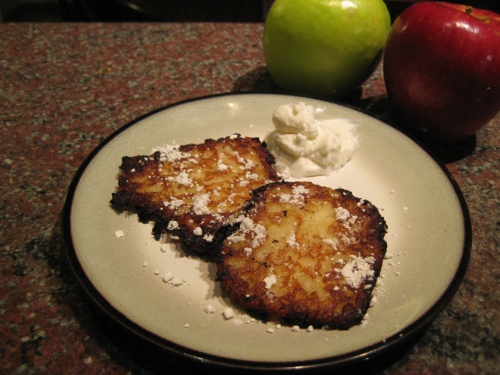 I love latkes, really I just love fried potatoes and latkes give me the excuse, at least once a year, to eat massive quantities of fried potatoes.  It got me thinking though, why stop at dinner with the latkes? Much like French (pomme de terre), the Hebrew word for potato (tapuach adama) translates as “apple of the earth”. This led me to the the brilliant idea to use apples to make a sweet dessert latke. Turns out it was such a brilliant idea that many, many, people have had this idea in the past and I even found a couple recipes for them.   Claudia Rodan has a recipe in her cookbook, but they are really just battered and deep-fried pieces of apples. They sound delicious but not really what I was after. Joan Nathan has a good base recipe and all of the internet recipes seem to be based on hers.  As usual, she screws around to have both parvre and dairy options. It also has  so much added flour that it calls for additional liquid in the form of milk or orange juice. The only reason for flour is to compensate for the lack of starch that potatoes would normally supply to the mix. This got me thinking on other starches to bring to the table and I remembered that Cooks Illustrated recommends tapioca starch for fruit pies because it has no flavor and a very smooth consistency. I ventured on over to 99 Ranch and found a bag tapioca starch for 89 cents.  Right next to it was a small bag of rice flour for 79 cents. I picked that up as well because rice flour often has a nice light crunchy texture when fried. I used a combo of granny smith for tartness and braeburn apples for sweetness. With all of these components I came up with the following recipe and it is delicious. This makes about a dozen latkes.

frying the first side

fying the second side