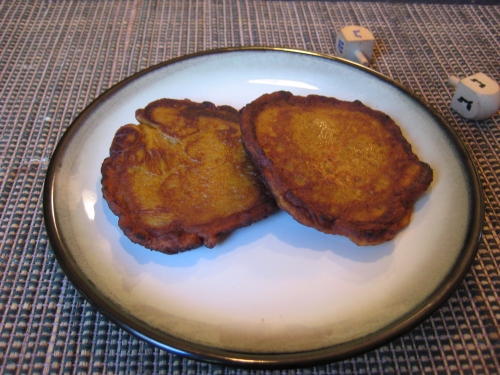 Its the day after Thanksgiving and I am enjoying the satiety that come from too much food and drink, and in the miracle of miracles, I finally got a seat at the grown-ups’ table. I had thought it might happen, given the guest count and but I have been having Thanksgiving with the same crowd for about 25 years and had yet to graduate, so I wasn’t holding out too much hope. But happen it did and it was all that I’d hoped for, but I was promptly told it was a fluke occurrence and I would be headed back to the “young adult” table next year. While today I will bask in the glory of my newly recognized adulthood, Hanukkah is just around the corner (starting Wed night) so the frying and latke making has already begun for the Heathens. I figured in honor of Thanksgiving I would carry on the pumpkin theme and make pumpkin latkes. Obviously these have a slightly different texture than traditional potato latkes, and are more pancake like. They are also slightly sweet so I would include them with my apple latkes as a great Hanukkah breakfast or dessert option.

As with many of our other pumpkin based recipes, this recipe is Sephardic in origin and I began with home roasted and pureed pumpkin. Again feel free to use canned.

One response to “Pumpkin Latkes”