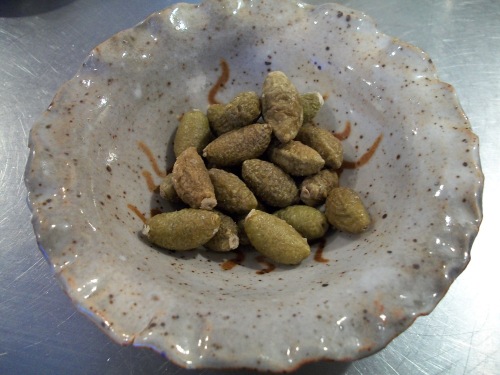 An appetizer of fried olives

It’s not kosher to boil a kid in its mother’s milk (Deuteronomy 14:21). So here’s my question, is it kosher to fry an olive in olive oil?

I was thinking of this a few weeks ago as I sat, tired and recovering from a cold and several days of travel at Palace Kitchen in Seattle where a friend had taken me and insisted that I have some olive poppers before indulging in a really remarkable hamburger. It reminded me of a different take on fried olives that I had loved at a place called Downtown in Berkeley. A week later I walked past and saw that they were gone so I decided that I would try to recreate their tasty feat for the oil drenched holiday of Hanukkah.

Hanukkah celebrates the fact that the oil on hand lasted 8 days, seven days longer than expected. As an aside it also celebrates the defeat of the Selucid Greeks at the hands of the Hasmoneon rebels (aka the Maccabees). But since their descendants had more than a few Rabbis killed our tradition concentrates on the oil.

NOTE: I tried a couple of different olives at the store and then decided that Lucques Olives had the best balance of firmness and tang to stand up to frying. As an experiment I grabbed some other olives from a small jar of mixed olives and found that of all the others oil cured olives worked as well or better than the Lucques. This seemed to be a feature of their skins, which are crinkled up and then puff and crisp when fried- who doesn’t love crisp fried things.

Peanut oil (you can use olive oil, but it has a low smoke point and is tricky to use for frying)

2) Dredge the olives in rice flour until evenly coated

4) Remove olives and allow to cool and serve warm

The olives at Caputo’s in Salt Lake City

Nothing is better than this

An appetizer of fried olives

Some of the other experiments, dry cured were best

Filed under Cured and Pickled, Hannukah

One response to “Deep Fried Olives”