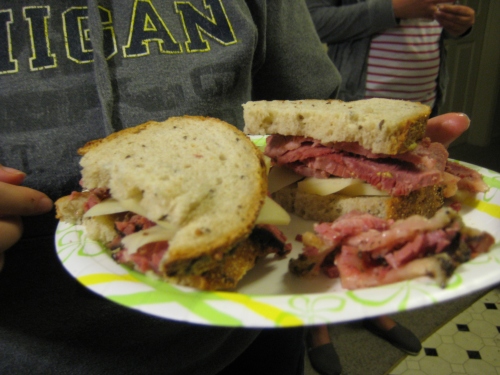 This past weekend I was fortunate enough to be invited over to my friends, Evan and Leo’s for a deli tasting.  Moishe and Leopold as they sometimes refer to themselves are living the dream. They quit their jobs and are on the path to revitalizing Jewish deli in San Francisco, by opening a true delicatessen dedicated to high-quality meats and baked goods that are worthy of the San Francisco foodie palate .  To help get their recipes down, they cooked up a storm and fed about 40 people house-made pastrami, corned beef, pickles, and  coleslaw, all on fabulous rye bread.  Leo made 14 loaves of rye and even threw in a chocolate chip challah toward the end of the evening.  He’s turned into a master baker and showed me with great pride his rye starter that he brought with him from LA when he moved back to the bay.  Evan is the meat man, and spend most of the evening slicing pastrami and corned beef, but thoughtfully smoked some shiitake mushrooms to make veggie reubens for the few vegetarians who dared to venture into the house of meat. The whole apartment has been taken over with bins of pickles fermenting, crates stacked with bags of flour and curing salts and cooling racks waiting for bread and rugelach. Evan’s roommate Robby may soon be up for an award for being the most tolerant house-mate in San Francisco, but I suppose the constant supply of food makes its easier to deal with.

END_OF_DOCUMENT_TOKEN_TO_BE_REPLACED

Filed under Ashkenazi, Cured and Pickled, Deli, Jewish, Other Stuff