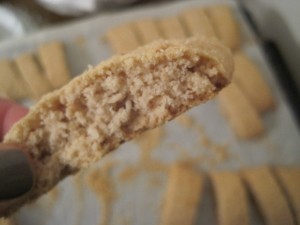 My Bubbe (Yiddish word for grandmother) Julie is unstoppable. At 90 years old, she is still maintaining a three-story house, driving her car around Vancouver, and cooking up a storm. When my family and I are in town, we eat everything Bubbe makes for us–even if we are not hungry. I can still distinctly remember about 10 years ago when my father was interrogated by a US customs officer for carrying a poppyseed cake in a brown unmarked box, fresh from the oven. “What is in the box?” they asked. “It’s a poppyseed cake baked by my mother-in-law, I promise.” One of my favorites in her baking repertoire is kosher for Passover kamish. It almost doesn’t take like Passover. You may have heard kamish referred to as “Mandelbrot” or “Jewish biscotti”. It’s all the same: sweet, crunchy and delicious.

END_OF_DOCUMENT_TOKEN_TO_BE_REPLACED 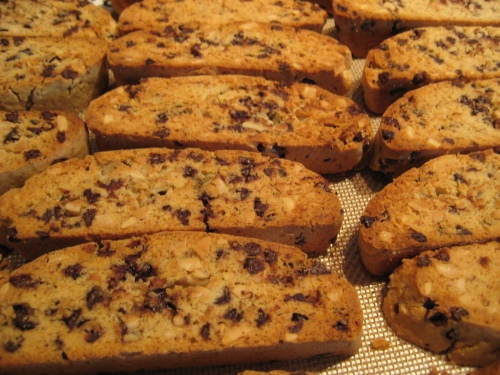 Mandelbrot is sometimes referred to as Jewish biscotti, but while similarly shaped and twice baked like biscotti, it has its own unique characteristics. Mandelbrot translates from Yiddish as “almond bread” and is a traditional cookie of Ashkenazi Jews. There is very little know about its historic origins but it has been speculated that Jews from Northern Italy brought the biscotti to German Jews and the recipe  evolved over time to today’s treat. I had mandelbrot well before the pre-Starbucks espresso craze of the early ’90s introduced suburban America to the biscotti.  I remember trying a biscotti for the first time and finding it virtually inedible unless it had been  soaked in your coffee. Expecting the softer, crumbly texture of a mandelbrot I almost destroyed my not yet paid off orthodontia biting down on a dry biscotti at my local “italian cafe” the Coffee Roast Express. I’ve rarely eaten them since. My husband’s Grandma Tina used to make mandelbrot every year for Hanukkah and he always looked forward to them. It makes for a nice, not too sweet after dinner treat with coffee or tea. While chopped or slivered almonds are essential, most modern recipes omit almond meal (ground almonds). I suspect it was either hard to come by or  expensive, but the exploding “gluten-free” baking trend seems to have made it more readily available. I found a 1lb package at Trader Joes for $2.99. (BTW- never ever try to feed me gluten -free anything that really should have gluten in it. I will throw it at you) The almond meal really creates a nice texture. I also have been having a pretty strong sweet tooth this past week so I made this batch with mini chocolate chips.

Recipe after the jump ….