Hamantaschen with an Argentine Twist 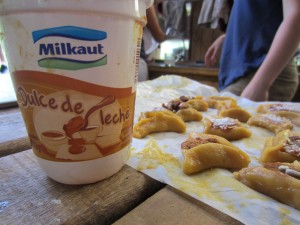 Hola from Argentina! Despite the large Jewish population here, I’m a bit isolated in the north on a rural farm, without the pleasures of Jewish bakeries so the following recipe was inspired by the ingredients I could get my hands on. As a substitute for the traditional honey, I used dulce de leche, an Argentine sweet gooey delight. Try using it as well as a filling for the cookie!

END_OF_DOCUMENT_TOKEN_TO_BE_REPLACED

“What foods other than hamantaschen are traditional for purim?!”

This is the question I asked myself (and google) this week. According to Wilshire Blvd. Temple in Los Angeles, there are quite a few of other more savory options. Among them are kreplach, filled with minced meat or vegetables to evoke the response of stopping and general noise making upon hearing ‘haman’. Some communities will also eat nuts and beans because *legend has it* Esther ate mostly these foods in the court of King Ahashuerus (he didn’t keep kosher).

So what about this year’s fun shabbat/purim combination?! Polish Egg Bread. Also known as “koyletsh” (or sometimes spelled: keylitsh, keylitch, koilitch, koylatsh) this is an extra rich challah type bread prepared for special occasions and Purim. Why Purim? Apparently the long strands for braiding are supposed to remind us of the ropes used to hang Haman. So morbid.

END_OF_DOCUMENT_TOKEN_TO_BE_REPLACED

These are from Theeboom Bakery in Amsterdam

American Purim is usually celebrated by many things, one of which is the Hamantaschen. First, let’s get a little background on the Hamantaschen. It is triangular and usually filled with jelly (though my mother ingeniously fills them with chocolate). The word “Hamantaschen” was erroneously thought to mean Haman’s hat, and shaped accordingly. Anyone who knows a bit of German will immediately negate this claim – the word taschen actually means “bags” in modern German, but a few centuries ago, it also meant pockets. So there you have it, Hamantaschen actually means Haman’s pockets. Hope yours aren’t too full of lint!

A few years ago, I spent several months in Amsterdam. Before Purim, I went to the local (really the only) Jewish bakery in town, and asked for Hamantaschen. The puzzled response, as though I was speaking a foreign language (well I guess I was) surprised me. I soon discovered that I would not be able to get Hamantaschen like my mother’s in A’dam, but rather a puffed treat that is the cookie made for Purim. I was a bit upset, but what could I do I was a long way from home.

So Kicheleh, in Yiddish (the Dutch word is Keisjeliesj – a similar sounding word), are fried dough with powdered sugar, and what is the standard Dutch Purim treat. They are shaped to emulate Haman’s ears. I made them last night for dinner, and all my friends argued they are better than Hamantaschen. I disagree, but to each is own.

On this blog we focus on food and its delights. However, for each holiday there is an underlying theme. The other common (and commanded) thing to do on Purim is to give gifts to the poor. As important as food is, there are more important things in the world. So eat your Hamantaschen, and kicheleh, until bursting, but do make sure that you give a something to those who need it most. Chag sameach!

END_OF_DOCUMENT_TOKEN_TO_BE_REPLACED 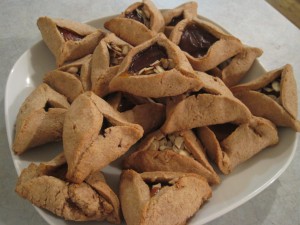 The strongest memory I have of Purim from my childhood included mass-produced, store-bought Hamantaschen served to my Temple community during the Purim Carnival. Chalky, bland, high-fructose-corn-syrup-y and double the price in tickets of all the good carnival games, I was a little less than interested. That’s why I was so excited when my friend and expert baker, Dara, shared her dough recipe with me.

Filling for Hamantaschen is where the FUN comes in. Be creative. Go wild. This year, I am using organic apricot preserves, dark chocolate and slivered almonds.

END_OF_DOCUMENT_TOKEN_TO_BE_REPLACED 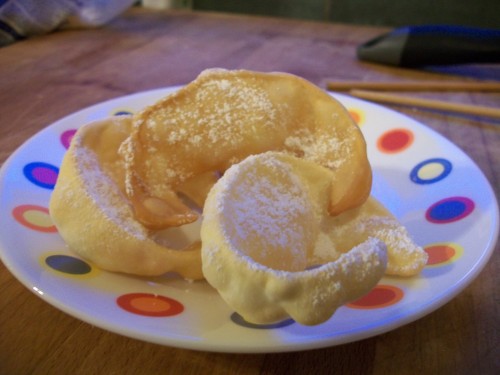 There is only one mandatory action on Purim, that is to hear the story of the deliverance of the Jews from the hands of their enemy, Haman. One might debate whether this was due to Esther’s sexual manipulation of the king at her uncle Mordecai’s urging or it was in fact due to divine intervention.

What is not in debate however is the ferocity of the Jewish observance of the event. Jewish custom is to get stinking drunk and yell, scream and stomp every time Haman’s name is read aloud and generally remind everyone that we hold grudges for a very long time.[Don’t believe me, the Jews are the only people to remember the tribe of Amelek- just so we can observe the commandment to blot out their memory. That’s more than 2000 years of holding a grudge because they tried to jump us in the desert.]

This extends into the foods consumed on Purim. Oznai Haman (Haman’s Ears) come in several forms, ranging from stuffed cookies to this interesting fried pasta recipe I found. Of all of the Purim foods I have seen these turned out to be the most life-like and perhaps raising the greatest number of questions for a liberal western Jew to answer as he presents a plate of these fried ears to his kids.

I invite you to offer your own thoughts on consuming something that looks so much like a body part, and remind you that between Haman and his 10 sons (who were all impaled on wood spikes) there would have been 22 ears, snacks for everyone.

END_OF_DOCUMENT_TOKEN_TO_BE_REPLACED

The next major holiday on the Jewish calendar is Purim. While we will crank out several variants of the traditional hamantachen (I know Amiee is working on her poppy seed filling) I wanted to try something new. In asking around I was told by my spouse that her co-worker who is Israeli of Egyptian descent makes Ma’amoul for Purim. Intrigued since I had never even heard of them I quickly consulted Claudia Roden

who supplied a recipe that I then modified. Roden does not mention a holiday connection, but says her mother kept a box of these around all the time. But, since every good tradition has to start somewhere- I am going say this is indeed a Purim treat, sweet like the deliverance of the Jews from Haman.

Some notes on production. The dough will look loose and crumbly at first, let it rest to firm up. This is traditionally made with rose-water, which I do not keep on hand but feel free to swap out some of the milk for an equal amount of rose-water. Third, you can make any filling you want, Roden says that pistachios were the most prestigious given their price. Last, Roden says her mother made a design on the top with “dented pincers”. Having no idea what that might look like I did a Google image search and found that many people use a mold to create intricate designs that would make any Christmas cookie baker proud. I decided that I would keep it simple, scoring the tops with a fork in the manner of my own grandmother’s sugar cookies.