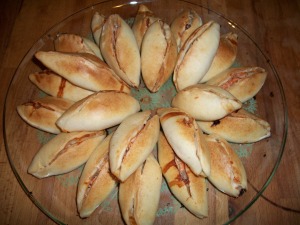 Would you care for a snack?

Remember that show, the one about nothing? Well it was very flattered in Israel by a knock-off version whose name I cannot recall and is presently eluding my web searches. In it the Kramer character goes to a new bourekas bakery in his neighborhood (it all takes place in Tel Aviv) and is shocked to discover that the baker has disrupted the unwritten rule of fillings and shapes. For instance a potato boureka is always a rectangle, a triangle is always cheese, a pizza filling is a cylinder, while spinach filled resembles a pastry knot. One can picture the physical reaction of this character as he bites into a triangle shaped boureka and discovers that it is filled with spinach!

I was equally shocked to discover this past week that there are several different doughs that can be used to make this tasty little treats since all of the Israeli versions are made with the same flaky pastry dough. Much like the knish, there are regional variants in dough and filling across the Jewish communities of the near east and south eastern Europe. From Marrakesh to Salonika these small filled pies were popular additions to party menus. The word itself comes from the Turkish word for pie.

I decided to try a traditional Turkish recipe that Claudia Roden

offers and filled them with a salmon, onion and cheese filling.

END_OF_DOCUMENT_TOKEN_TO_BE_REPLACED

Well the heathen chicken wagon rolls forward with entry number two. Sumac berries are the red ripe berries of the the non-poisonous variety of the sumac tree found in the Middle East. Not to be confused with its North American relative. It is widely used in Jewish and Arab cooking and almost any Arab restaurant worth its salt (from the old Roman custom of paying soldiers in salt) will have a sumac rubbed chicken on the menu. The presence of it in a Jewish establishment marks the menu as coming from the Syrian, Lebanese or Land of Israel Jewish communities. The flavor is bright, tart and reminiscent of cranberry or currant.

I found mine in a middle eastern market here in Berkeley. I am always of two minds when shopping in these places. On one hand I lived for several years in Israel, have an array of Arab friends and even spent a week eating my way through Amman. So I am tempted to ask for things with a degree of comfort and even engage with the staff about whether the Za’atar is fresh and the pita local. On the other hand by doing so I know that sooner or later I will be asked where my knowledge comes from (I do not look in any way Middle Eastern).  That is usually a relationship killer. But not always, I recall the owner of a Kebab place in Kansas City who was from the West Bank. He told me he loved American Jews- they were his best customers. In the end I kept my mouth shut and bought some ground sumac, some za’atar and some fava beans. The za’atar and the fava beans are for another day of cooking however.

The other thing I should point out is that I roast my chicken butterflied. This is a technique that I use to allow for a more even cooking time (the breasts and thighs cook at the same speed) and you get a nice expanse of crisp skin as a bonus. Also it should go without saying that you should brine your chicken. I added a tsp of sumac and a tsp of smoked paprika to the brine.

Recipe after the jump