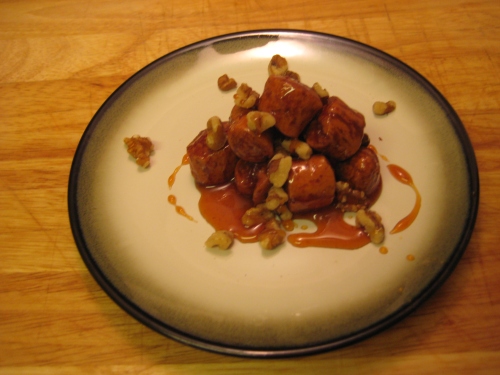 I’ve been planning to make teiglach for the past couple of weeks, but with the Bay Area in a heat wave I was trying to avoid turning on my stove for the required hour. With Simcha Torah coming up tomorrow night I was rapidly running out of time for the recipe to be relevant, so I cranked up the A/C to get these done in time for the culmination of the high holidays. Given that it was 95 degrees in San Francisco yesterday, I may have lost my mind a little bit, but sometimes a little sacrifice is required for my art. As you prepare to celebrate the beginning of a new cycle of reading the Torah (finish up Deuteronomy and start-up again with Genesis), teiglach make a nice sweet treat to go along with the obligatory drinking and hakafot.

While I have definitely never made teiglach I also started the project thinking I had never eaten them either and was unprepared with for what they would taste like, but upon biting into the completed cookie I remembered having them at some point as a kid.

Teiglach literally means “little dough” in Yiddish and has its history in the Lithuanian Jewish community, and is traditional for Rosh Hashana and Simcha Torah. (Apparently holishkes are also traditional for Simcha Torah, as the rolls of cabbage are symbolic for the Torah rolls) While boiling dough in honey seems a bit odd, the dough cooks up crunchy like a cookie covered in a sticky honey syrup.  The ingredients are quite basic and the process is very simple but the resulting cookies are oddly addicting.