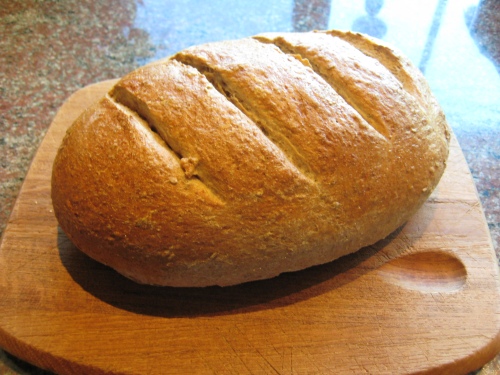 Rye bread may be the quintessential Jewish bread. I know some people may argue that it is challah, but rye is the glue that holds so many Jewish lunches together. The reuben, pastrami sandwich, chopped liver, the patty melt … pretty much any Jewish deli will have loaves and loaves of rye any day of the week. Rye is a different kind of grain than wheat and is widely grown in Eastern Europe and Russia which explains how rye bread became a staple of  Ashkenazi kitchens.  The flours resulting from it vary as much as wheat flours do. (It also makes some pretty good whiskey) They are typically labeled light, medium or dark and this has to do with the bran content, with the dark containing the most bran and being the equivalent to whole wheat flour. The light rye will produce a softer spongier bread like you would find in a deli, but my household has been attempting to eat more whole grains so I sacrificed some texture for a bit more nutritional content this time. Rye breads is usually made with a mix of wheat and rye flours. Marc told me the other day the he is working on rye bread’s cousin, pumpernickel, which is made from all rye flour. Rye bread typically has a sour note to it and I consulted a number of recipes, which had wide variations in the sour starter but ultimately fell back on Cooks Illustrated.

Recipe after the jump

The sponge is best started the night before you want to make your bread and should have a tangy sour smell in the morning.

sponge the next day